Horrified and angry residents of Istiaia and surrounding villages in northern Evia have been flooding media with dramatic appeals for aerial fire fighting means as the big forest fire fronts are approaching out control on Saturday afternoon. The fires are completely out of control, one after the other villages are ordered to evacuate, but locals are reluctant as they want to protect their properties.

“A fire engine came and parked in the village square without doing anything,” an outraged local woman told Open TV. I told them to come and save my home but they said they had orders to wait at the square,” she added.

Short time later, another resident said that the fire was just 3 km away. The woman added that aerial means have been grounded since one and a half hour ago.

“We ask for a little water to save our lives and our homes,” a man shouted. The young man is one of the locals who desperate try to build some last-minute anti-fire zones, however, with unprofessional means. 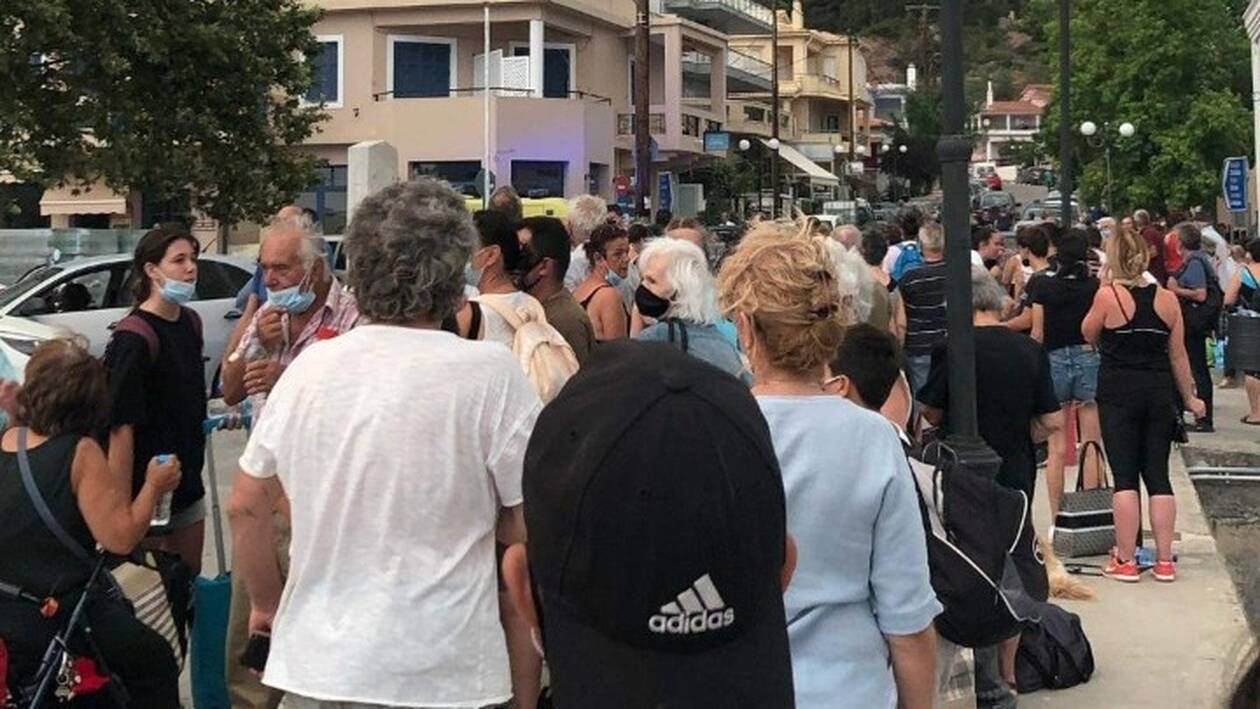 The capital of North Evia has been the ‘collection’ place for thousands of  people from central Evia who have been evacuated in the last five days due to horrendous fires on the island, the second biggest in the country.

Just Friday night another 1,000 people, among them elderly, were evacuated by ferry late from the town of Limni flames reached the shore and the sky turned an apocalyptic red.

Video snippet reportedly filmed from one of the ferries that was evacuating people who were trapped by the fire on Evia island late on Friday night. #Ευβοια pic.twitter.com/i0eyODnWcl

Deputy regional governor Giorgos Kelaiditis told media that they have making dramatic appeals to Civil Protection for aerial and ground forces mean, but “they never came.”

The governor of Sterea Fanis Spanos said that more than 250 houses in the municipalities of Mantoudi-Agia Anna-Limni have burned down with families to have turned homeless and another 50 in Istiaia-Aidipsos Municipality whre the damage registration is still ongoing.

More residents in the area were ordered to evacuate short before 5 o’ clock Saturday afternoon. This time is was the people of Galatsiades, Katramades and Milies.

TV channels showed the first ferries at the beach of Pefki waiting for evacuated locals.

With professional fire fighting means to be apparently ‘rare’ as locals complain, many are reluctant to leave behind their homes, their agricultural land and the forest that feeds them as well as and their livestock unprotected to the force of the blaze.

A resident of Vasilika told Alpha TV at 6 pm that the blaze was just 200 meters away from the village. “We will not leave, we’ll protect our village,” he said adding that the elderly and families were gone, however, mostly young men stayed behind to protect the village. “We can’t leave, we have to do something,” the man said adding that there were hardly any aerial means and ground forces.

Earlier the mayor of Istiaia Giorgos Kontzias had told media that the town was not at risk of fires, but Vasilika where the flame reached the shore,Kryoneritis, Voutas and Kyparissi.

He added that properties have burned down.

One 45-year-old fire fighter was injured from fall construction material early Saturday morning during the battle against the fire. His health condition is not in danger.

There are several reports of firefighters and volunteer fire fighters who were initially trapped when the flames surrounded villages.

Greece has been facing an unprecedented number of forest fires since the end of July and the peak is in the last 6 days, with over 400 fires across the country.

The biggest fire fronts are still burning in the north of Athens, in Evia and in areas in the Peloponnese including Mani, Messinia and Ancient Olympia, the site of the first Olympic Games

On the island of Euboea the fires are approaching the town of Istiaia where thousands of residents are trapped and can only escape through the sea, there is an urgent need for any sort of boats/ferries near the area to help evacuate people! #Ιστιαια #Ευβοια #Πυρκαγια pic.twitter.com/pOWCAQPhoz

The heavy smoke from Evia has reached the Attica basin and Athens creating a ‘suffocating’ atmosphere and the smell of burning wood filled the air since early morning Saturday.