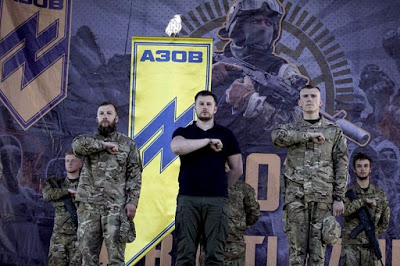 Israeli arms are being sent to a heavily armed neo-Nazi militia in Ukraine, The Electronic Intifada has learned.

Azov Battalion online propaganda shows Israeli-licensed Tavor rifles in the fascist group’s hands, while Israeli human rights activists have protested arms sales to Ukraine on the basis that weapons might end up with anti-Semitic militias.

In a letter “about licenses for Ukraine” obtained by The Electronic Intifada, the Israeli defense ministry’s arms export agency says they are “careful to grant licenses” to arms exporters “in full coordination with the Ministry of Foreign Affairs and other government entities.”

The 26 June letter was sent in reply to Israeli lawyer Eitay Mack who had written a detailed request demanding Israel end all military aid to the country.

Azov’s official status in the Ukrainian armed forces means it cannot be verified that “Israeli weapons and training” are not being used “by anti-Semitic or neo-Nazi soldiers,” Mack and 35 other human rights activists wrote.

They had written that Ukrainian armed forces use rifles made in Israel “and are trained by Israelis,” according to reports in the country.

The head of the Israeli arms export agency declined to deny the reports, or to even discuss cancellation of the weapons licenses, citing “security” concerns.

But Racheli Chen, the head of the agency, confirmed to Mack she had “carefully read your letter,” which detailed the fascist nature of Azov and the reports of Israeli arms and training.

Both the defense ministry letter and Mack’s original request can be read in the original Hebrew below.

The fact that Israeli arms are going to Ukrainian neo-Nazis is supported by Azov’s own online propaganda.

On its YouTube channel, Azov posted a video “review” of locally produced copies of two Israeli Tavor rifles – seen in this video:

A photo on Azov’s website also shows a Tavor in the hands of one of the militia’s officers.

The rifles are produced under licence from Israel Weapon Industries, and as such would have been authorized by the Israeli government.

IWI markets the Tavor as the “primary weapon” of the Israeli special forces.

It has been used in recent massacres of unarmed Palestinians taking part in Great March of Return protests in Gaza.

Fort, the Ukrainian state-owned arms company that produces the rifles under license, has a page about the Tavor on its website.

The Israel Weapon Industries logo also appears on its website, including on the “Our Partners” page.

Starting as a gang of fascist street thugs, the Azov Battalion is one of several far-right militias that have now been integrated as units of Ukraine’s National Guard.

Staunchly anti-Russian, Azov fought riot police during the 2013 US and EU-supported “Euromaidan” protests in the capital Kiev.

The protests and riots laid the ground for the 2014 coup which removed the pro-Russian president Viktor Yanukovych.