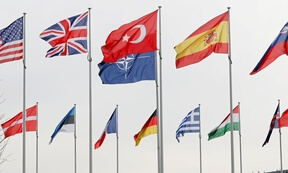 Turkey pushed NATO allies into watering down an official reaction to the forced landing by Belarus of a passenger plane and the detention of a dissident journalist on Sunday, two diplomats familiar with the matter told Reuters.

NATO’s 30 allies released a two-paragraph statement on Wednesday condemning the forcing down of a Ryanair flight to arrest journalist Roman Protasevich but did not include any punitive steps that Baltic allies and Poland had pressed for.

The statement was also less strident than NATO Secretary-General Jens Stoltenberg’s public remarks. He called the incident a “state hijacking” and “outrageous”.

Ankara insisted that any mention of support for more Western sanctions on Belarus, and calls for the release of political prisoners there, would be left out of the text, the two diplomats said. Language threatening a suspension of NATO’s cooperation with Belarus was also removed, they added.