When the European Commission finally realized that something serious was going on with corona, it launched, among other things, an initiative to support short-time work schemes, as Germany did as a reaction to the 2007/9 ‘financial crisis’. Similar measures were introduced in many EU countries at national level to cope with the economic and social effects of the pandemic.

On 2 April the EU launched SURE [i]. The idea was that member states could take out cheap loans to financially support temporary short-time work schemes. After all, many companies are much beyond of their former capacity (in some sectors they even lost up to 80 percent of their former business). Without government support, so goes their tale, they would have to shed many employees towards unemployment.

Maybe you say: loans do not really support governments, who can borrow anyway, and borrowing means higher public debt. The fact is, however, that the Commission (EC), as the executive body of the EU, can borrow more cheaply than many member states. Since the financial crisis, we know that this is even true within the euro-zone, where, for example, Greece has to pay much more for a government loan than Germany.

In financial jargon one speaks of the spread, the difference compared to Germany’s  interest rates for government bonds. It would be different if those member states could borrow directly from the European Central Bank (ECB), which could charge the same low rate for everyone. But the EU treaties explicitly forbid such a thing. Governments therefore have to borrow from private banks and financial institutions, which charge a ‘risk premium’ that is all the higher the more difficult a country’s economic situation is. If the European Commission now presents its SURE initiative (and other similar loans in the context of the corona recovery policy) as a shining example of European ‘solidarity’, this is only a very partial correction to a fundamentally non-solidary construction based on market discipline.

Six months to respond to an emergency situation

Another consequence of the ban on ECB lending to member states is that cumbersome, time-consuming manoeuvres have to be performed now that the EU is (for the first time, and breaking its own rules) taking out loans to pass them on to member states. The ECB can make billions available to banks in a jiffy, as happens with ‘QE’ (quantitative easing). The SURE initiative, on the other hand, officially launched on 2 April, took until the end of October, i.e. more than half a year, to pass on the first ‘solidarity-based’ loans to Italy (10 billion), Spain (6 billion) and Poland (1 billion). So the ‘support in an emergency’ comes rather late.

Why is this? In order to borrow, the Commission first had to provide a ‘guarantee’. To this end, all 27 member states had to agree to guarantee a total amount of € 25 billion, in proportion to the national income of each member state. It was only on 22 September that the Commission was able to report that this operation had been completed, although only commitments, not payments, had to be made. With this guarantee in its pocket, the Commission was then able to borrow an amount four times higher (by a so-called leveraging operation). In order to do this, a syndicate of banks had to be called upon to issue bonds, an operation that took place via Barclays, BNP Paribas, Deutsche Bank, Nomura and UniCredit. For future loans (probably one more in 2020, the next in 2021), this procedure will have to be gone through again.

In a sense, for EU standards, the gathering of the commitments of the 27 member states was a ‘success’. Indeed, in countries where fulminating against the ‘debt union’ is part of the identity of a number of parties, political riots may arise around it. This cape was apparently taken. On 22 September, the Commission rejoiced that “the voluntary commitment of guarantees is an important expression of solidarity in the face of an unprecedented crisis”. When, a month later, a bank consortium, for an unknown fee, sold the ‘social bonds’ in no time and under impetuous enthusiasm from investors, it once again gave rise to enthusiastic statements from the Commission. After all, this enthusiasm proves the great confidence that the markets place in the creditworthiness of the EU…

In the meantime, the Commission published an overview of the loan amounts which could possibly be requested by various countries: 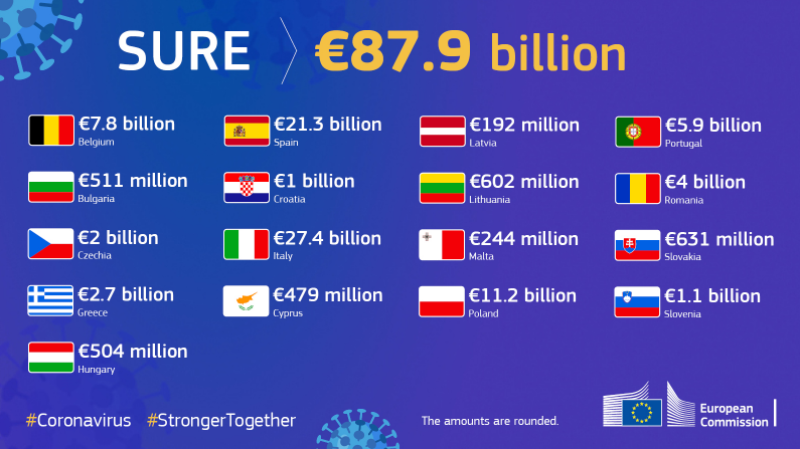 It will be noted that a whole series of countries (Germany, the Netherlands, Austria, Denmark, Finland, …) are missing. There is also a good reason for this: they borrow more cheaply on the market. According to the Financial Times (19 October), the Commission lent to approximately minus 0.24% [ii]. Belgium seems to be in an intermediate position, hoping to take some advantage of a ‘European’ loan.

All in all, if we look at the SURE programme globally, there is little reason to speak of a success of ‘Europe and its values of solidarity’. First and foremost, it concerns loans, which will be paid for by the national states and therefore largely by the working population. Secondly, as already mentioned, it is at most a correction to the self-imposed ban on direct loans by the ECB to the member states. Furthermore, one cannot speak of an emergency intervention when it takes more than six months to take a limited initiative in a dramatic context. After all, this is limited in any case: €100 billion, of which only €17 billion are disbursed now, while Europe is plunged into a second corona wave. One hundred billion is ultimately less than 1% of EU GDP.

So we shall see what really will happen. Perhaps the current governments of e.g. Italy, Spain and Portugal have become more desperate because of the second corona lockdown in their respective countries and are now willing to take up the SURE loans (which they did not not touch upon before). The situation in Italy is indeed very desperate. Maybe also other poorer countries will apply for these loans (e.g. Romania). However, the European Central Bank may act as a ‘counterweight’ to ‘light Keynesian spending’.