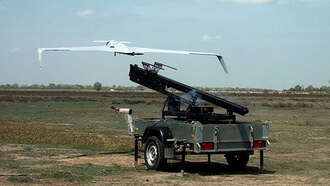 The military actions taking place in Nagorno-Karabakh today are significantly different from the clashes that occurred here earlier. We are talking about the mass use of attack drones. Azerbaijan is using UAVs to test a model of combat operations against Nagorno-Karabakh, which in the future can completely change the picture of land combat in all future wars.

Azerbaijan reports daily on the destruction of numerous artillery installations, MLRS, air defense systems and other military equipment, especially tanks. The Armenian defense Ministry also reports on its large-scale successes. Each side shows video reports as confirmation of combat results. Such information, as usual, is overstated by each of the parties. Nevertheless, it is already obvious that in this still local war, a special place is occupied by unmanned aerial vehicles (UAVs). They determine the strategy and tactics of combat operations. Before our eyes, a kind of war of the future is being formed, when machines controlled from a distance go into battle.

Drones are now used in almost all the armies of the world. UAVs perform reconnaissance and strike functions, are capable of carrying various weapons or being used as a “guided missile” (another name is kamikaze drone). Their effectiveness was also demonstrated during the current conflict in Nagorno-Karabakh. Video footage distributed by Azerbaijan shows Azerbaijani army drones, mostly of Turkish and Israeli production, attacking Armenian tanks.

Yerevan has significantly fewer such video reports, although Armenia is also actively using UAVs. Armenia has 90 percent of its own production of UAVs – mostly light, reconnaissance class, while there are also attack UAVs, such as the Krunk-25-1 and its further modifications. The impact power is not so great, the “bomb load” does not exceed 15-20 kg of TNT equivalent, and the speed of this aircraft at maximum mode is 140 km/h. Armenia has several dozen of them, and they are theoretically able to destroy the enemy’s armored vehicles. However, the Armenian side prefers not to brag about drone victories. Apparently, because there are not so many of them. Military experts note that Armenia is significantly behind the Azerbaijani army in terms of the number and quality of drones.

And if Armenia mainly uses drones of its own production, the Azerbaijani army is mostly Israeli – Aerostar, Hermes, Heron, Harop, which is Orbiter 2M. And in addition, Turkish-made Bayraktar TV2 attack UAVs, which were captured on video during the attack on Armenian tanks. Their range is limited to 250 km, the “bomb load” is also not so high – something about 50 kilograms, which means two ATGM missiles or a kamikaze warhead that allows you to guarantee the destruction of one tank.